We can fix your Apple iOS device 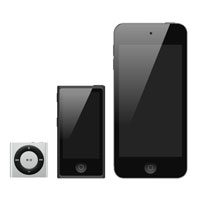 The iPod is a line of portable media players and multi-purpose pocket computers designed and marketed by Apple Inc. The first version was released on October 23, 2001, about ​8 1⁄2 months after the Macintosh version of iTunes was released. As of July 27, 2017, only the iPod Touch remains in production.

Before the release of iOS 5, the iPod branding was used for the media player included with the iPhone and iPad, a combination of the Music and Videos apps on the iPod Touch. As of iOS 5, separate apps named "Music" and "Videos" are standardized across all iOS-powered products. While the iPhone and iPad have essentially the same media player capabilities as the iPod line, they are generally treated as separate products. During the middle of 2010, iPhone sales overtook those of the iPod. 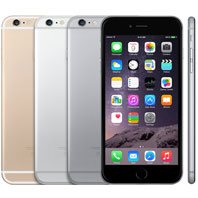 The iPhone is a line of smartphones designed and marketed by Apple Inc. All generations of the iPhone use Apple's iOS mobile operating system software. The first-generation iPhone was released on June 29, 2007, and multiple new hardware iterations with new iOS releases have been released since.

The user interface is built around the device's multi-touch screen, including a virtual keyboard. The iPhone has Wi-Fi and can connect to cellular networks. An iPhone can shoot video (though this was not a standard feature until the iPhone 3GS), take photos, play music, send and receive email, browse the web, send and receive text messages, follow GPS navigation, record notes, perform mathematical calculations, and receive visual voicemail. Other functionality, such as video games, reference works, and social networking, can be enabled by downloading mobile apps. As of January 2017, Apple's App Store contained more than 2.2 million applications available for the iPhone.

Apple has released eleven generations of iPhone models, each accompanied by one of the eleven major releases of the iOS operating system. The original first-generation iPhone was a GSM phone and established design precedents, such as a button placement that has persisted throughout all releases and a screen size maintained for the next four iterations. The iPhone 3G added 3G network support, and was followed by the 3GS with improved hardware, the 4 with a metal chassis, higher display resolution and front-facing camera, and the 4S with improved hardware and the voice assistant Siri. The iPhone 5 featured a taller, 4-inch display and Apple's newly introduced Lightning connector. In 2013, Apple released the 5S with improved hardware and a fingerprint reader, and the lower-cost 5C, a version of the 5 with colored plastic casings instead of metal. They were followed by the larger iPhone 6, with models featuring 4.7-and-5.5-inch (120 and 140 mm) displays. The iPhone 6S was introduced the following year, which featured hardware upgrades and support for pressure-sensitive touch inputs, as well as the SE—which featured hardware from the 6S but the smaller form factor of the 5S. In 2016, Apple unveiled the iPhone 7 and 7 Plus, which add water resistance, improved system and graphics performance, a new rear dual-camera setup on the Plus model, and new color options, while removing the 3.5 mm headphone jack found on previous models. The iPhone 8 and 8 Plus were released in 2017, adding a glass back and an improved screen and camera. The iPhone X was released alongside the 8 and 8 Plus, with its highlights being a near bezel-less design, an improved camera and a new facial recognition system, named Face ID, but having no home button, and therefore, no Touch ID. In September 2018, Apple again released 3 new iPhones, which are the iPhone XS, an upgraded version of the since discontinued iPhone X, iPhone XS Max, a larger variant with the series' biggest display as of 2018 and iPhone XR, a lower end version of the iPhone X.

The original iPhone was described as "revolutionary" and a "game-changer" for the mobile phone industry. Subsequent iterations of the iPhone have also garnered praise. The iPhone is one of the most widely used smartphones in the world, and its success has been credited with helping Apple become one of the world's most valuable publicly traded companies. 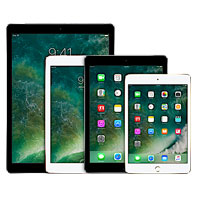 The iPad is a line of tablet computers designed, developed and marketed by Apple Inc., which run the iOS mobile operating system. The first iPad was released on April 3, 2010; the most recent iPad models are the iPad (2018), released on March 27, 2018 and the 11-inch (280 mm) and 12.9-inch (330 mm) 3rd generation iPad Pro released on November 7, 2018. The user interface is built around the device's multi-touch screen, including a virtual keyboard. All iPads can connect via Wi-Fi; some models also have cellular connectivity.

As of May 2017, Apple has sold more than 360 million iPads, though sales peaked in 2013. It is the most popular tablet computer by sales as of the second quarter of 2018.

An iPad can shoot video, take photos, play music, and perform Internet functions such as web-browsing and emailing. Other functions – games, reference, GPS navigation, social networking, etc. – can be enabled by downloading and installing apps. As of March 2016, the App Store has more than one million apps for the iPad by Apple and third parties.

When we replace a battery we first need to disassemble the device and remove the faulty battery. After the bad battery is removed we will then install the replacement battery. We will also run a few tests after installing the new battery to verify that the battery is functioning properly.

LCD screens can experience a variety of problems. The screen could crack, have dead pixels, or stop responding to touch. If your iPod Touch, iPhone or iPad has a problem with the screen we can diagnose and fix the problem. The first thing we will do is check to see what part of the device's screen is having problems. All Apple iOS product touchscreens have two parts to them: the LCD screen and a digitizer. The digitizer is located underneath the LCD; it is what will translate your touch to something the device can understand. All of Apple's touch screen devices have the LCD screen and digitizer fused together, so whenever we replace a screen we replace both the LCD screen and digitizer.

Just like computers, iOS devices (like iPhones, iPads, and iPod Touches) can sometimes experience glitches in their firmware (operating system). Depending on how the device is used some people might experience this problem more than others. iOS devices can have firmware issues that might have been caused by updates, installing bad applications, or physical damage to the device. For a firmware flash, we need to connect the device to some sort of medium which, in most cases, is a computer. Once the device is connected we will back up any data (if it is accessible), wipe the software that's on the device, then re-install the operating system so the device is running a clean and untouched firmware.

These are the most common problems or issues related to Apple iOS devices that we receive. If you experience a problem that you don't see listed here, please call us or stop in and we will diagnose it for you!