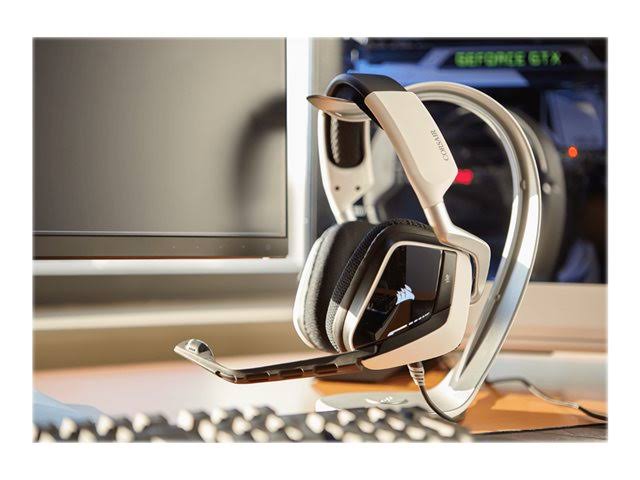 A few months ago, the development team at Armor decided to implement softphones through their computers to make their work lives just a little bit easier. While the developers sat there with their fancy headsets on day after day, I grew quite envious. Eventually, (through constant persistence) I convinced my boss I needed a headset too.

Prior to the approval, I was already looking at which headset would be best for me. I had very few qualifications that the headset had to meet, as I’m not a gamer outside of work and didn’t know anything at all prior to making a decision. As everyone in the office will tell you, I’m very particular with my tastes, so it definitely had to look good. RGB was a necessity, and while pink was the color preference, I decided white was the next best thing (there was unfortunately no good headsets with plastic cat ears either).

Next, it had to have a good reputation, because when it comes down to it, I was still going to have to wear the headset for around eight hours a day. So it had to be totally functional through and through. After searching through numerous reviews, I finally landed on the Corsair Void for my headset choice.

The overarching feature that most casual or professional users are interested in a headset always seems to come down to the comfort level for short and extended use periods. We can attest that the Razer Kraken USB Headset was designed with your comfort in mind. With a fully padded and adjustable headband, the headset sits comfortably on the top of the head and allows for 10 different positions for each ear cup. The ear cups themselves are plush padded and are over-the-ear closed cup style, meaning your ear rests comfortably inside of the ear cuff, and because of this, the noise-canceling is excellent. The way the headset is designed leads to a little bit of pressure on your head to hold it in place but not nearly enough to cause any problems, in our experience. Overall, it is one of the most comfortable headsets anyone at Armor has had the opportunity to use, especially for the fairly inexpensive price point.

The sound on the headset is excellent. It boasts Dolby 7.1 surround sound My favorite feature of the headset is how dynamic the sound is. It sounds as though the sound is moving around different parts of the earpiece, which makes the listening experience very unique as opposed to the Apple earbuds I was using previously. I also really like that no matter how loud or soft I have the volume set to, the sound is consistently crystal clear with no fuzz or static whatsoever.

As far as comfort goes, this is where the headset fell somewhat short to me. Another reason I landed on the Corsair Void was because of the rave reviews it got for comfort. Being a glasses wearer most of the time, I needed to ensure I wasn’t going to purchase something that was going to dig into the sides of my temples or backs of my ears.

The ear cups are in a trapezoidal type shape as opposed to round, which is supposed to make them form around the ears better. Unfortunately, I found that this shape didn’t do much for me in regards to comfort. Where my glasses arms are in front of my ears, I’ve found that the headphones push on them and causes them to dig into the sides of my head. Mind you, I have a pretty small head and actually wear the headphones on the smallest setting.

My other complaint in regards to comfort is the weight of the headset. The headset comes in at 1.7lbs which doesn’t sound like much, but as someone who isn’t used to wearing anything on their head, it is quite heavy. Even on the smallest setting that fits my head, the tops of the ear cups push down on my head above my ears. It’s an odd feeling to explain in words, but it almost feels like it pinches at the top, but if I loosen it at all, all the weight hangs on the tops of my ears.

As far as general function, the headset totally serves its purpose. I’ve never had an issue with configuration or sound at all. Upon removing it from the box, I was able to plug it into my computer and have a totally functional headset. When making calls, I can hear clearly and have never had anyone complain about hearing me. However, the microphone arm is not flexible. While it does flip up to be out of the way while not in use, I do wish I could move the mic a bit closer to my face.

I also wish that the red light that comes on to indicate that the microphone is muted was placed elsewhere. It isn’t visible when the headset is on as it’s angled away from the face. The only way I can see it is if I hold my hand up in front of it and see the light reflection on my skin. This isn’t a big deal for someone like me who just uses the headset for a softphone, but for a gamer, taking their hand off the keyboard or controller I can see it being more of an issue.

My favorite thing about the headset’s functionality is the volume button. If I’m listening to music not-so-quietly and someone in the office tries talking to me, it’s very easy to turn my volume down with the toggle switch. Once they're done, it’s also a piece of cake to just turn it back up. The headset is also equipped with a 1.8 meter (nearly six feet) cable, which is plenty long for me.

Overall, this headset does it’s job and looks good doing it, but it definitely falls short on comfort. While someone with a larger head may feel differently about the comfort, I can’t say in confidence that I would recommend this headset to a glasses wearer, with a small size head, who would need to wear the headset for an extended period of time.