We can fix your Galaxy, Galaxy Nexus, or Galaxy Note 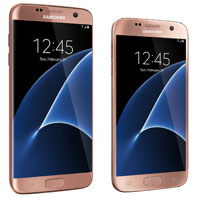 The Samsung Galaxy S7 is available from the five major carriers: Verizon Wireless, AT&T, T-Mobile, U.S. Cellular and Sprint, while also supporting Cricket, MetroPCS, Boost Mobile, and a No-Contract option. It is a 4G LTE capable phone in areas with 4G LTE. The Samsung Galaxy S7 runs on Android 6.0 Marshmallow. The S7 has 32 GB of internal storage depending on the model, can take up to a 256 GB microSD card, has a 1.6 GHz quad-core processor, a virtual QWERTY keyboard and a 5.1 - 5.5 inch Dual edge Super AMOLED touchscreen depending on the model. The S7 also has a 5 MP front-facing camera, and a 12 MP rear-facing camera.

The Galaxy Note line was originally launched in October 2011 and has now gone through six generations. The Samsung Galaxy Note 5 is available from AT&T, it shipped with Android 5.1 Lollipop, but as of February 2016 support for Android 6.0.1 Marshmallow has been added. It utilizes 4G LTE (where available). The Note has 32 GB or 64GB of memory, an octa-core processor with four cores at 1.5 GHz and four cores at 2.1 Ghz, a virtual QWERTY keyboard, integrated S Pen, and a 5.3 inch HD Super AMOLED touch screen. The Galaxy Note also has a 5 MP front facing camera and a 16 MP rear facing camera. The talk time on the Note is up to 21 hours.