For nearly the past decade, the field of cloud-based and locally-based game streaming has matured from a niche field into a fully developed set of products and services. As startups and large companies have continued to fight for your living room device space, the variety of hardware at your disposal has changed and expanded dramatically. We’ll be looking back at the history of video game streaming, what it looks like today, and how you as an individual can make the most of your own hardware, at an affordable cost.

With cloud-based streaming being a typically paid service that connects your machine to a data center that does the graphical heavy lifting, while local-streaming connects to a more powerful machine in your own home to deliver high-quality game content at a lower latency. The former began with Onlive’s game-streaming platform in 2010, delivering a more mature experience ready for broadband than the older G-Cluster system demoed at E3 in 2000. Despite the novelty of using a “Microconsole” instead of a fully outfitted PC, and immediacy of Onlive’s service, slow adoption and the broadband speed constraints of their core market in the United States led to its difficulties. Onlive was later bought by Sony in 2015 and rolled into Sony’s existing 2012 acquisition of cloud gaming service Gaikai, leading to the development of the PlayStation Now: an on-demand game service which persists today. GeForce Now, a competing streaming service owned by graphics giant Nvidia, launched shortly after. More recently, Google tested and released their Stadia game streaming platform in early 2019, after performing a closed beta test in October 2018 with triple-A game title Assassin’s Creed Odyssey.

Is Hardware the Key?

Nvidia’s entrance to the cloud streaming business began differently in 2013 with its lineup of the Shield handheld game consoles, complemented by the Shield tablet in 2014, and later, the Shield Console in 2015. The initial purpose of these devices was to locally play games using Nvidia’s GameStream software, compatible with their Geforce lineup of graphics cards—GTX 650 and higher. Allowing console-esque gameplay in the living room, while a master PC ran online elsewhere in the same building put power back in the hands of players, allowing them to supply their own rig with its own variety of gaming-capable hardware. The open-source game-streaming client, Moonlight, using Nvidia’s GameStream platform, was developed by Case Western University students at the MHacks hack-a-thon in 2013, and then refined for release in 2014.

Arriving concurrently to the microconsole bandwagon was the game developer and distributor Valve, releasing their own Steam-based local game streaming client and companion SteamLink box in November of 2015. Valve had teased their intentions earlier with the release of “Big Picture Mode” in 2012, a larger and more television-friendly interface for the Steam game application. With the same performance as the Nvidia Shield $200 microconsole, but coming in at a price of $50, the SteamLink heavily undercut its competitors, while providing a similar living room gaming experience. Despite its aggressive price and initial fan enthusiasm, Valve discontinued the SteamLink microconsole in November 2018 and released the SteamLink platform as a software download for the Raspberry Pi hobbyist microcomputer.

Currently, there are a plethora of paid cloud game streaming services to choose from: Blade SAS Shadow, LOUDPLAY, PLAYCLOUD, GeForce NOW, Vortex Cloud Gaming, PlayStation NOW, and many more. But if you desire to have an experience liberated from subscription fees and proprietary hardware, Moonlight and the SteamLink software are the two best alternatives that take advantage of your existing gaming PC and allows you that living-room gameplay experience. Unfortunately, with the SteamLink no longer in production, it is likely that their price will increase as their numbers dwindle in marketplaces like eBay. Fortunately, with the affordability of a Raspberry Pi, coupled with the open-source Moonlight and Steam-driven SteamLink software, you can create a microconsole of your own that may play as well or better than the SteamLink box itself. 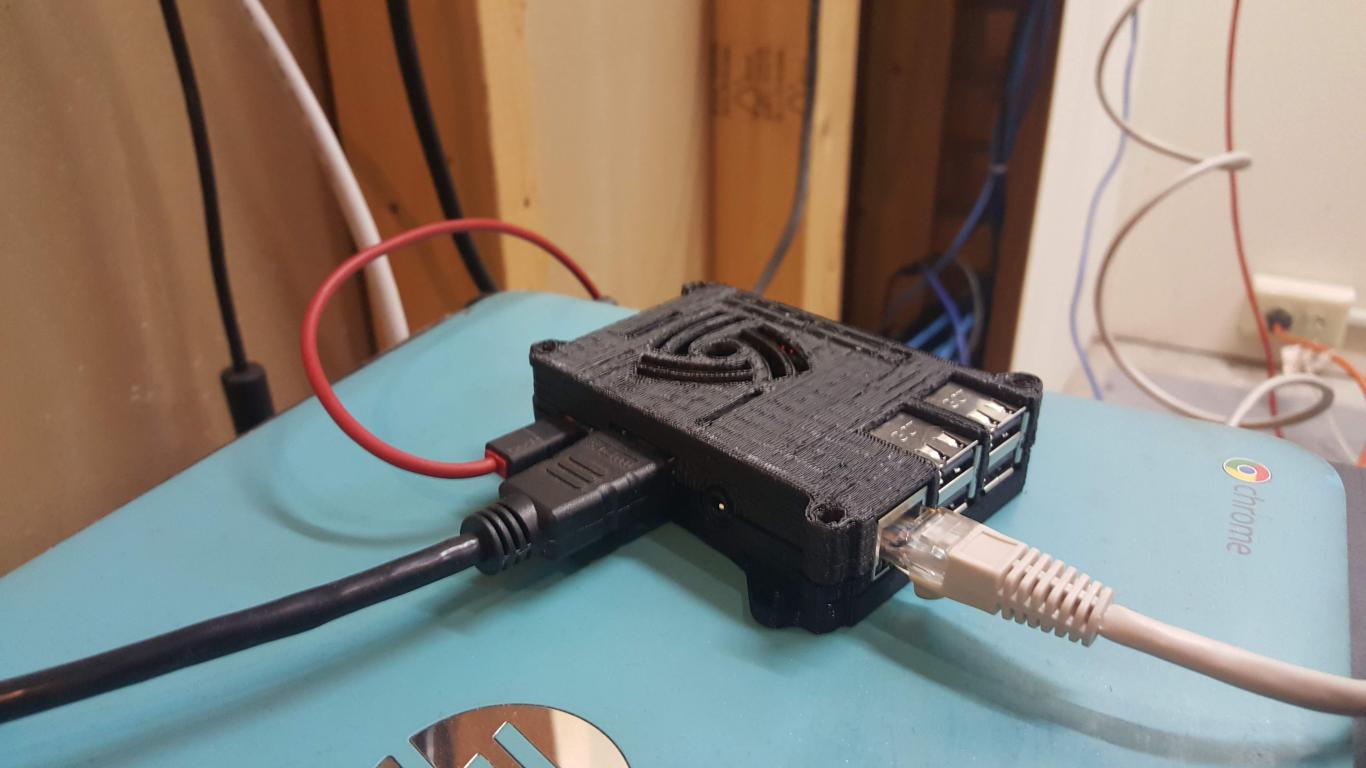 One of our in-house 3D printed cases for our Raspberry Pi SteamLink. We can print one for you too!

At our labs here at Armor Techs, we used a Raspberry Pi 3B+, 3D printed a custom case to house it, and installed a copy of the Raspian Operating System and SteamLink software. Everything is plug-and-play. Once the game-serving PC was updated with the current drivers, and the in-home streaming settings were enabled in Steam, the Pi immediately recognized the PC on the same wired network and ran a quick test to verify the connection was suitable for gaming. All it took was plugging an Xbox 360 controller into the Raspberry Pi, and we were already playing Rocket League, Astroneer, and Lego Starwars in our conference room HDTV. 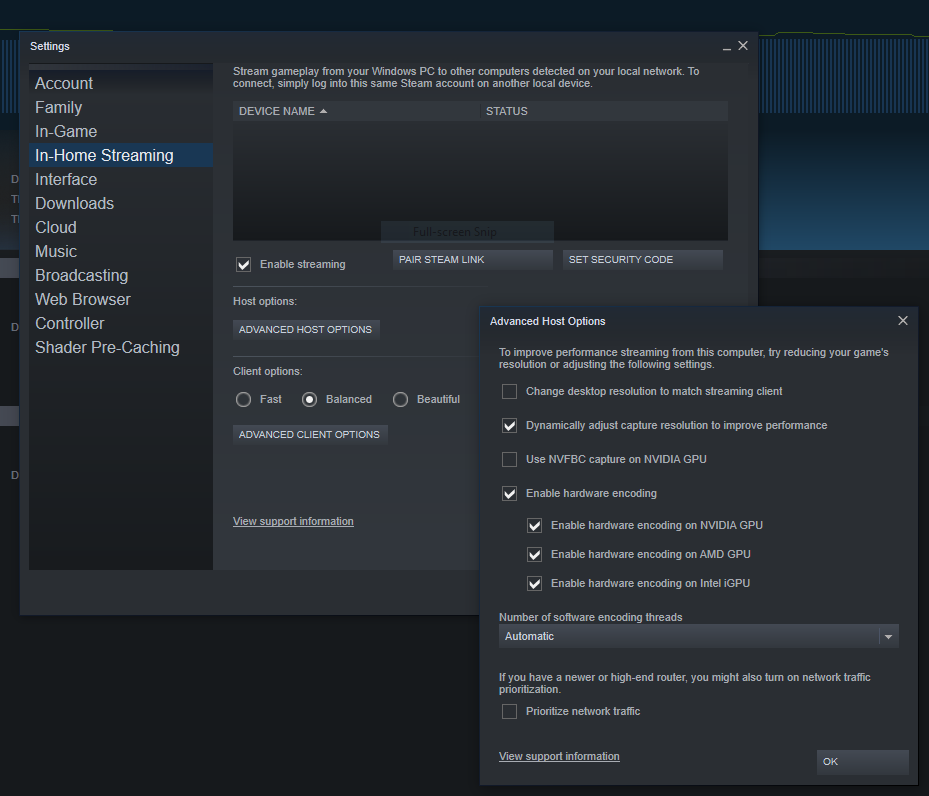 Gaming PC host streaming settings in Steam. This is where you adjust how the game is streamed to your microconsole.

Because of the slight latency and lower-quality, compared to a display directly connected to the PC, the best games for our Pi SteamLink setup were single-player titles that didn’t demand lightning-fast reflexes or a competitive edge. The settings on the PC’s Steam application allowed us to adjust the quality for the stream, which will reduce latency at the cost of a full HD experience: for example, enabling Vertical Sync (VSync) and turning down the resolution to 720p. Regardless, getting such an inexpensive, small package to pump out large-scale titles is a fantastic feeling. The Raspberry Pi box is an excellent and stealthy addition to any entertainment shelf, and with preloaded software, is just a cable away from delivering PC gaming to your living room. 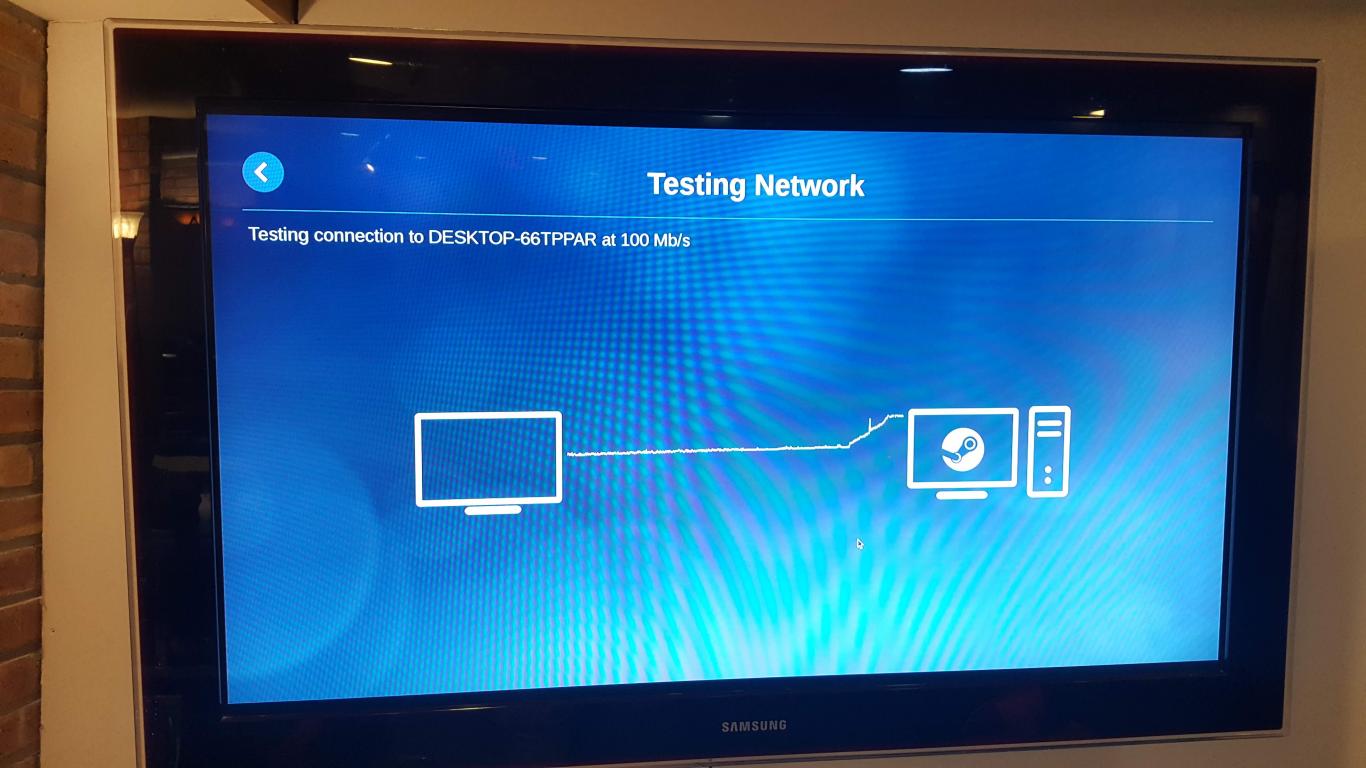 The SteamLink software automatically performs a speed test to gauge the maximum quality for your game streaming based on your network.

Although microconsoles probably will not entirely replace their bigger, older console brothers such as the Microsoft Xbox One or PlayStation 4, having a way to play your existing PC collection of games in the living room without the hassle of moving a large computer case is too convenient to pass up. With continued software development for Moonlight and support from Valve for their SteamLink client, the future looks bright for in-home streaming possibilities.

Have We Peaked Your Interest?

Our technicians are currently working on producing and selling our own line of premade and configured SteamLink microconsoles. Contact us to pre-order one and follow us on social media for more updates.